Recently while assisting with an Arduino project, I found myself needing a simple circuit which generates either a 1 KHz or or 100 Hz square wave. The reason for this was to connect to an interrupt pin to generate a timekeeping-level accurate 1ms or 10ms timestamp, which the Arduino its self cannot generate as its crystal is fixed at 16.000 MHz

This turns out to be a little more difficult than I expected. Because you can’t divide 100 down to 10 with flip-flops, whatever you end up building is going to do one frequency or the other, requiring a change in crystal to switch. So first of all, let’s look at which crystals can generate these frequencies:

A crystal that can divide down to 1 KHz must be a power of two, multiplied by 1000. Some examples (all of which are easy to come by) are:

Likewise, a crystal that can divide down to 100 Hz must be a power of two multiplied by 100. These are not so common. Some examples I could find:

Now I have to find an IC which can divide two of the above frequencies down to 100 Hz or 1 KHz. The trusty old CD4060 immediately jumps out. If we switch between 25.600 KHz and 32.000 KHz crystals, also changing the output stage – we’ve got a solution. Problem is, this solution falls foul of two my objectives – that one-and-only obscure 25.600 KHz crystal, which is not SMT.

With the only practical primary clock (for me) for 100 Hz operation being 6.5536 MHz, that rules pretty much all CD4xxx timers, which according to their datasheets, can’t operate with such high input clocks.

One more bump in the road

Because of the obscurity of 74xx292 in SMT, I’ve gone for HEF4541. The HEF4541 can in theory have a crystal connected directly to it, but after hours of profanities I discover that running at Vcc = 5V it can’t quite self oscillate at 6-8 MHz. We can prove this by shorting RS and RTC, and we see that it self-oscillates (with no other components) at about 5.9 MHz, which reveals the shortest propagation time between those two pins.

Great, so now we need another IC. Fortunately that only needs to be a 74HC2G04 which is tiny and inexpensive, barely increasing the footprint of this circuit. 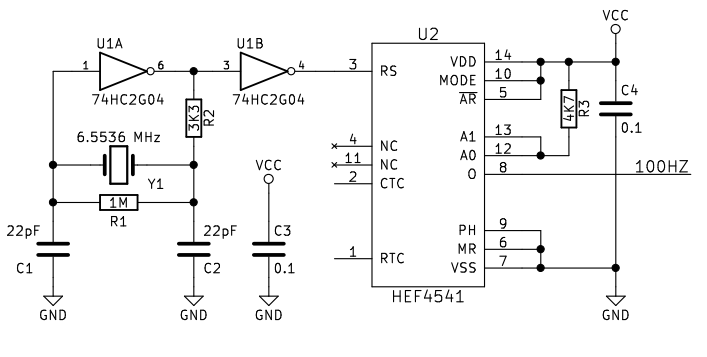 And now the 1 KHz version. R3 is moved, and the crystal frequency is changed. 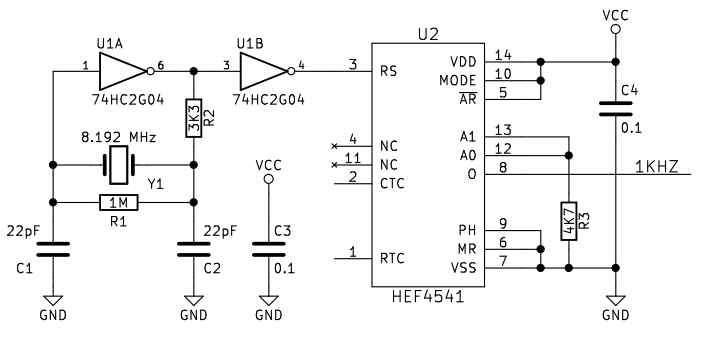