A little while back I bought this TV cheaply off Gumtree – probably one of the dumber things I’ve done, as it had an array of small but annoying problems, but recently it upped the game and failed to turn on, giving the above described blink code (which shows as 13 blinks, then followed by 14 blinks continuously).

Frustratingly there doesn’t appear to be any official triage documentation for this model online. A bit of googling around offers a few possible causes ranging from mainboard failure, LCD panel failure (?) and TCON (timing controller) failure.

But which is it? I first checked all the voltages on the power supply, all good, looked briefly at the TCON, couldn’t see any obvious issues there. I also took a look at the backlight – the mainboard wasn’t even attempting to power it on, so not likely the issue, but just to be double sure I powered it up manually by applying +3.3V to the BACKLIGHT_ON signal on the power supply. Sure enough it came on and none of the error signals were asserted.

Now I know the problem is either the mainboard or the TCON. I took a stab replacing the mainboard – hitting up eBay for a cheap second hand part. Upon installing it, I now get an 8 blink error code? More googling reveals an issue with the audio amplifier.

Ah. I see, so someone has torn the connector from the PCB when removing it from the donor TV. We can see those small traces have been torn the pads the connector was soldered to. 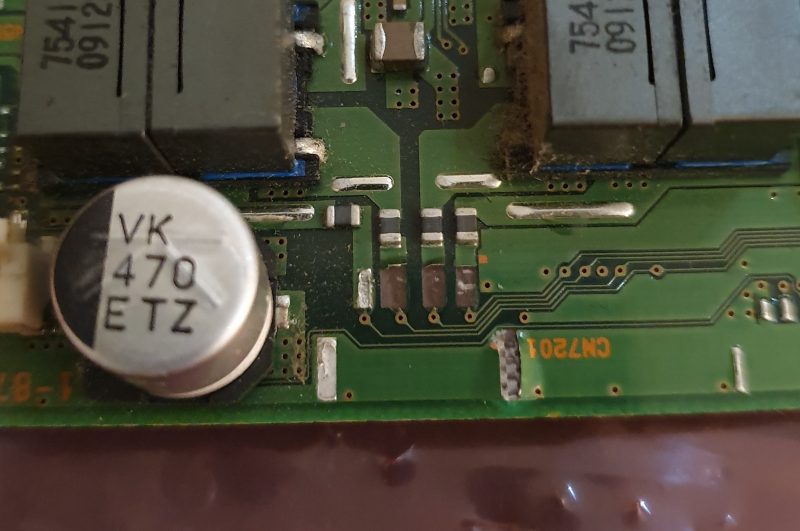 This was causing the 8 blink error code, as those small traces lead to an ADC which tests for DC offsets from the audio amplifier. This check ensures that we don’t end up with smoke pouring out of the speakers in the case of a blown transistor in the audio amplifier. In this case there was no DC offset, the error was just the ADC inputs drifting all over the place because they weren’t connected to anything.

Above you can see I’ve dickied a JST PH connector in place of the missing original – not quite the same as what was there but close enough, also taking care to reconnect those small traces. The original harness mates with it OK – just doesn’t latch.

So I switched it back on with the new mainboard… 8 blink error is gone, and now we’re back to 14 blinks. FFS. The good news is that the eBay seller fully refunded me when I complained of the damage, and I’ve still got the replacement mainboard, but, my TV still ain’t workin’.

So, let’s look at that TCON then. 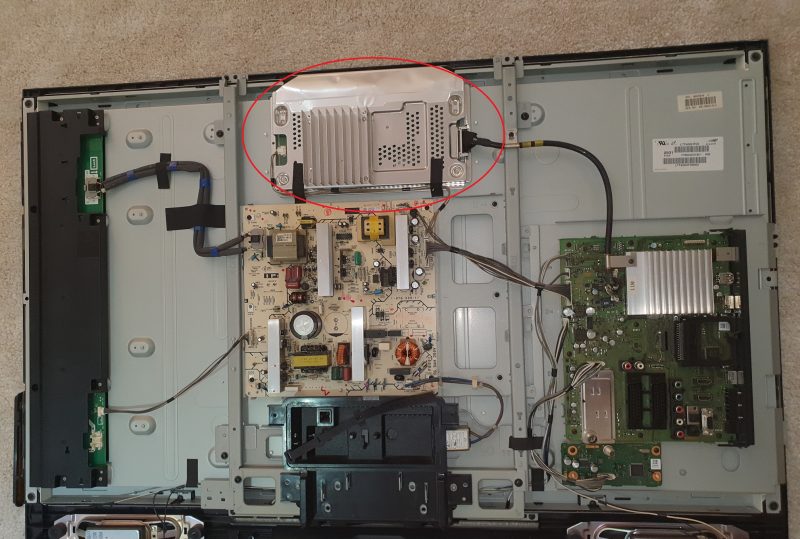 The TCON is under the aluminum shield circled in red. It converts the serialised picture data from the mainboard to the parallel signals required to drive the LCD panel.

I had purposely not gone down the path of replacing this because it’s not an easy part to find and I had read on other sites that if you disconnect the LVDS cable (the large black one which interlinks it to the mainboard), then power on the TV and it remains powered on (without a picture), then you definitely know that the TCON is at fault.

This was not I observed. In my case I get the 14 blink code regardless of whether or not the LVDS cable was connected. Additionally I had also spent a bit of time checking all of the supply voltages on the board, everything looked OK, hence attempting the mainboard first.

It turns out that bit of advice was rubbish in the case of my TV, because the 14 blink error code is seen both in the case of a TCON which fails self test, and when the TCON is disconnected.

I know this, because I found another (brand new) TCON very cheaply at a local TV service company, mis-labeled as “for Samsung” – knowing this is a rare and pricey part, I wasn’t going to be asking any questions. Upon installing it, my TV is now working again.

I’m picking that few faulty TCONs can easily be repaired, because this board subject to more thermal stress than anything else in the whole unit. After years of thermal cycling it’s likely that this one has died as a result of cracked BGA solder joints.

If you are keen to repair a TCON with this kind of fault – a good starting point would be to re-flow or re-ball, perhaps even replace the gamma processor and its memory (the three BGA chips on the left). The TCON itself (silver topped chip in the centre) is less likely to be an issue due to cooler running temperature.

Success in the end, with a lot of time spent on a worthless item. Perhaps a small bonus that the largely needlessly replaced mainboard fixed a couple of other minor faults. I’d have been a lot more successful if I’d never bought the damn thing in the first place.