Recently while doing some electrical repair / restoration work it occurred to me that I have quite a large collection of tapes.

There are thousands of types of specialty tapes out there, many of which the average reader of this site is likely to have torn out of its place at some point. In this article I will cover some of the most common types, some of which you may want to consider adding to your own collection.

Before we get started…

It’s worth mentioning a type of electrical tape which is most certainly not specialised – “DIY Store” vinyl tape. 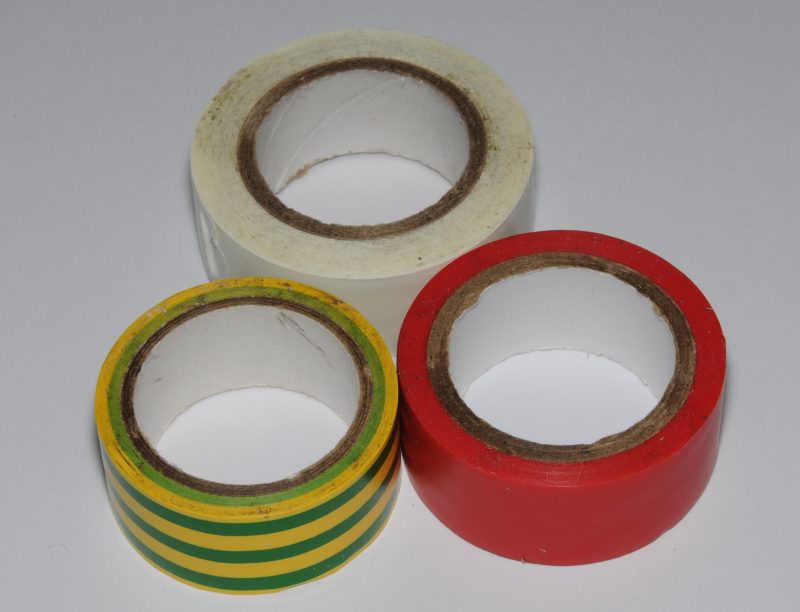 So far as I know this type of tape has no professional or serious uses. It is most commonly found in DIY electrical work, typically insulating  mains voltage conductors which have been twisted together by hand.

The key problem with it is that it is very elastic and usually stretched during application. This coupled with poor quality adhesive, this type of tape tends to want to unravel its self, eventually exposing the conductors it is supposed to be insulating.

Another problem with this type of tape, especially in the case of very cheap samples of it – is poor dielectric strength – often being responsible for earth leakage faults where it has been used to insulate “bodge job” mains cable joins.

If you are in the habit of using this stuff, depending on what you are using it for, you might want to consider using heat-shrink tubing, or perhaps a more specific tape in its place.

Most of the tapes I buy are either TESA or 3M – purchased from respectable sellers like RS, Digi-key, Mouser etc.

Tapes purchased from shady sellers on eBay / Amazon are often counterfeit or very poor quality – typically the adhesive strength and durability lacks in these tapes.

If you know of other manufacturers of some of the tapes I mention here and their series numbers – please drop a comment so I can add them here. 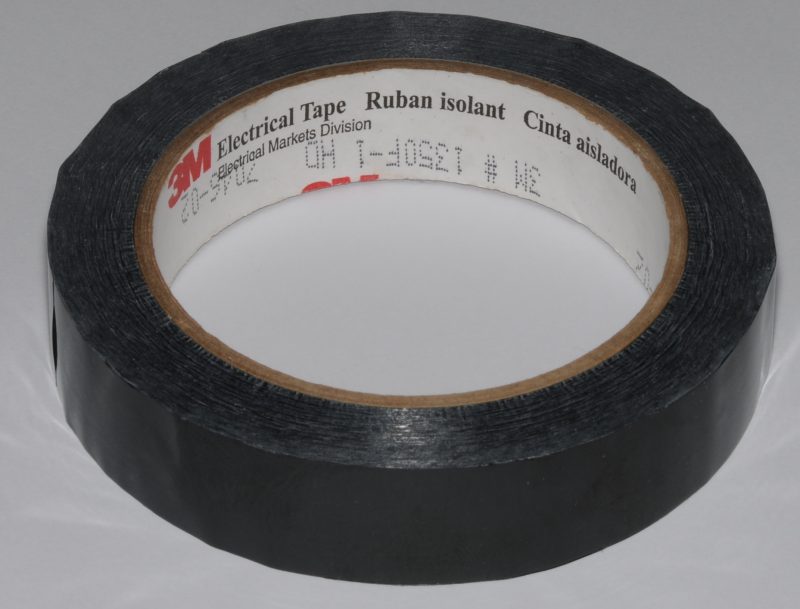 One of the most recognisable specialty electrical tapes fore sure. Mostly commonly found in yellow. My rolls here are of a less common black colour.

This tape is mostly seen in high frequency transformers and inductors. Its high dielectric strength, making it ideal for insulating primary and secondary windings in these transformers. 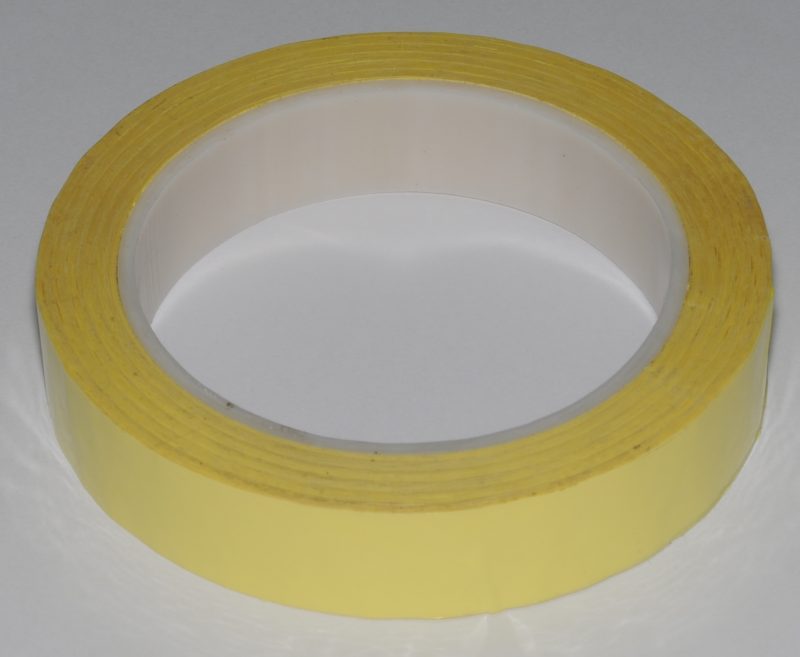 While I generally buy 3M branded tape, you can find plenty of examples of no-brand Chinese equivalents, one of which I have pictured here. I find these are OK to use if you don’t mind the generally poorer quality adhesive – not too much of an issue when wound into a transformer. 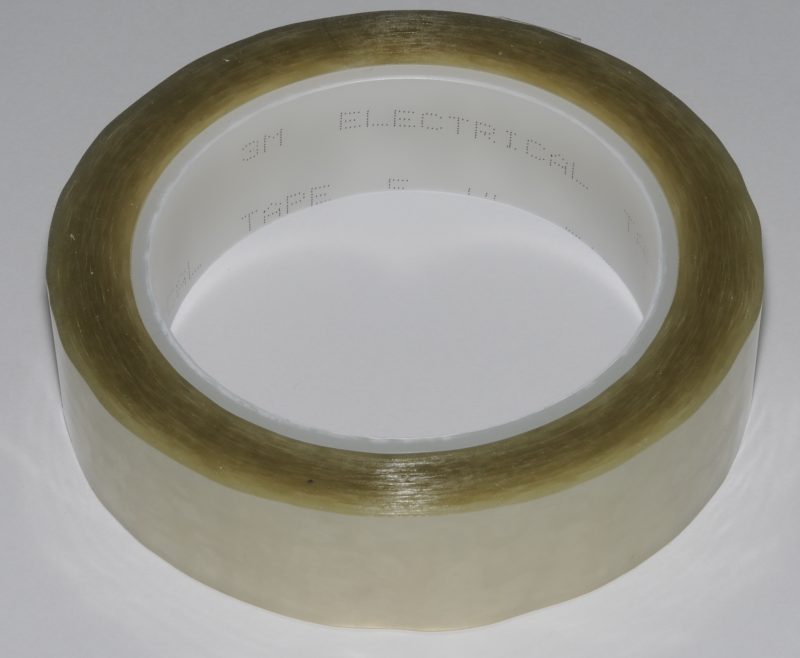 This tape is fairly similar to 1350F-1 but cheaper and available in clear. It has most of the durability of 1350F-1 but the transparency of regular “Scotch” or “Sellotape”. It is sold as an electrical type of tape but I’d say it’s good for plenty of other things too. 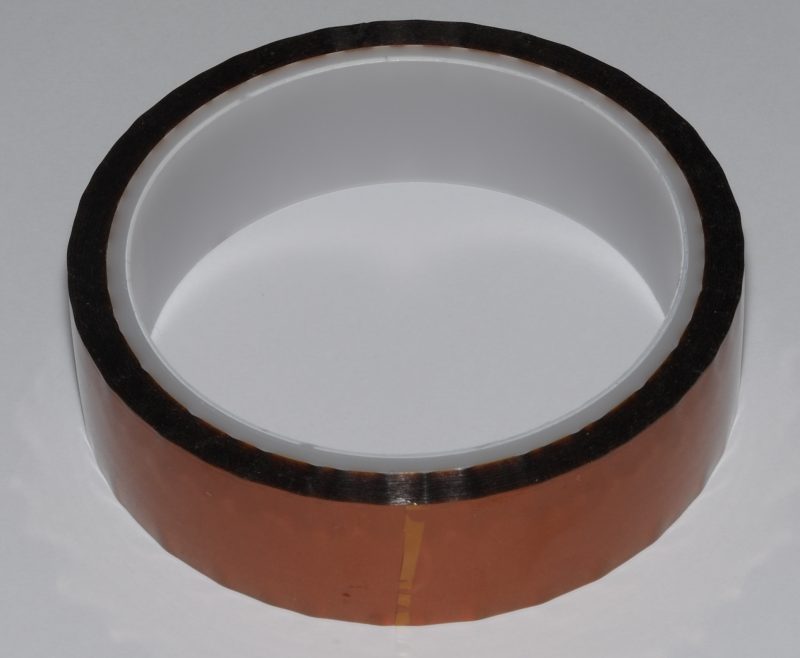 The most frequent use of this type of tape is for PCB rework, as it is able to withstand direct contact with the tip of a heated soldering iron.

I find that adhesive isn’t quite so great on this tape so tend to only deploy it in a situation where that isn’t a problem. 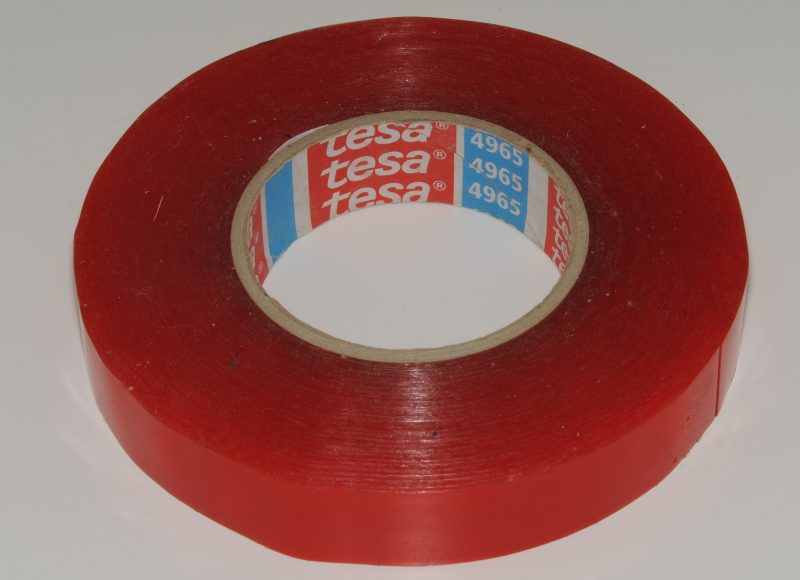 This isn’t an electrical tape as such but is one I use very frequently. 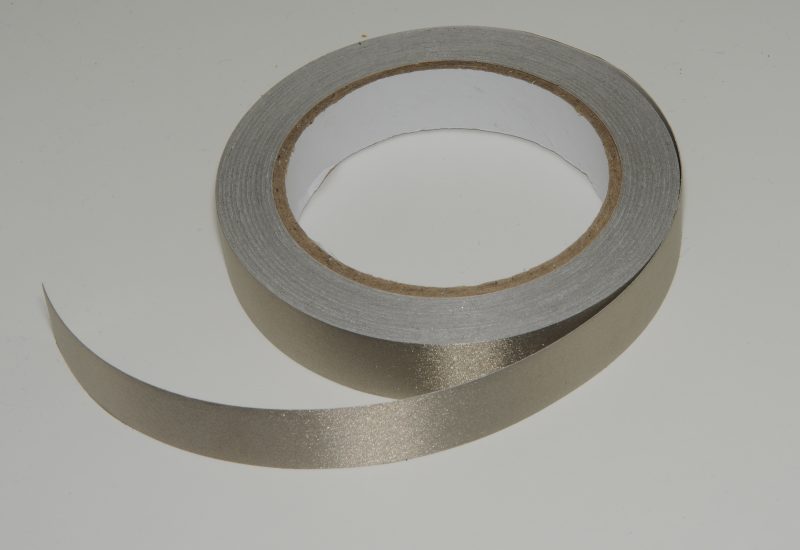 I am unsure what this stuff is made of, or who even makes it for that matter. A roll like this would have been purchased likely from either eBay or Amazon.

I am not aware of any part or series numbers of this type of tape from well known manufacturers. 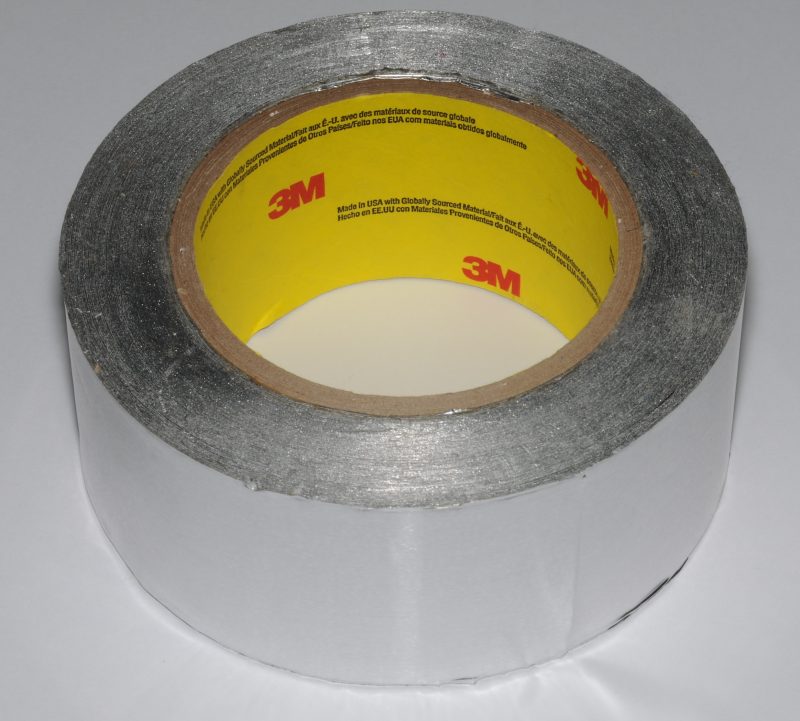 Like the above – usually used in EMI shielding applications. If you are thinking of buying some foil backed tape – do your research! There are many types of aluminum foil tapes many of which are beastly bitumen backed types for building use – not delicate electronics. 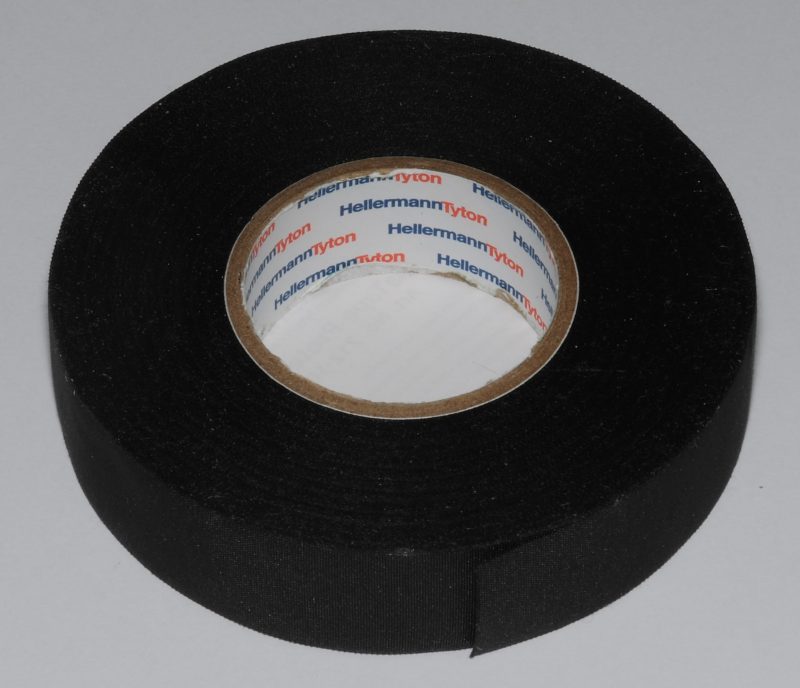 Not to be confused with “Gaffer” fabric tape – which has an awful thick backing with adhesive that leaves a mess everywhere it’s been applied.

This stuff is a much nicer soft fabric and is my favourite for bundling cables, particularly where they have to be handled regularly as this arrangement isn’t going to shred your hands like cable ties (or even pieces of heat-shrink) will. 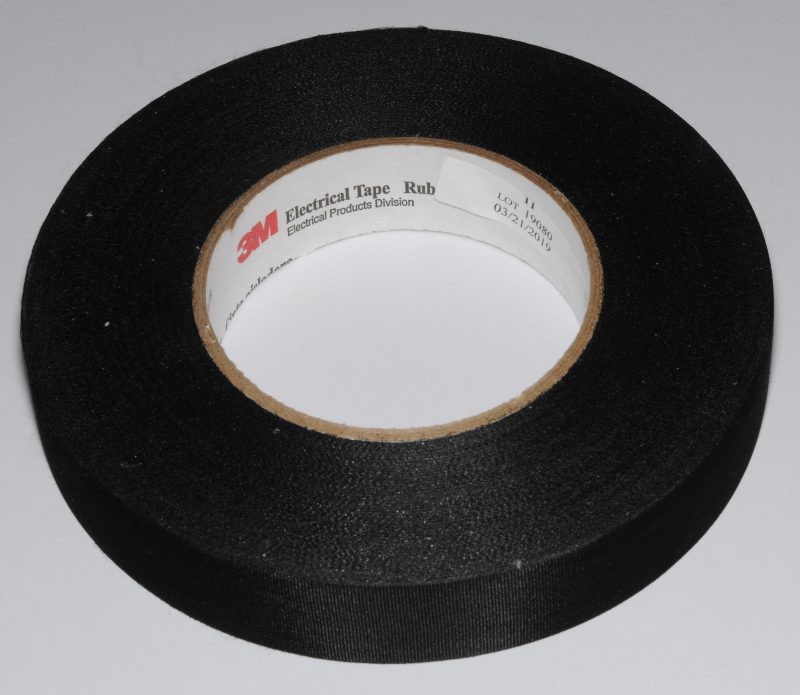 This type of tape is used for wrapping wire bundles. It has to be baked for an hour at 150°C to set, but gives very good results. 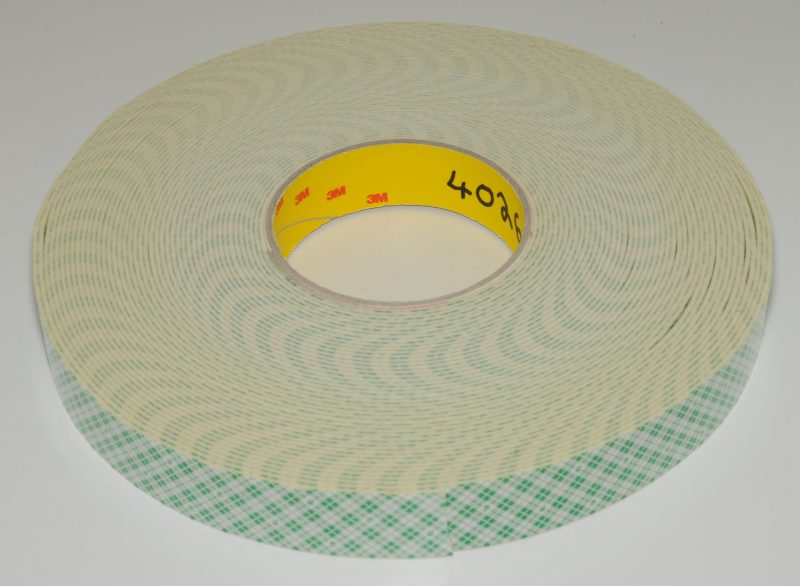 It is not a general replacement for attaching things properly (with screws) but sometimes that isn’t always an option!

I’ve only listed a tiny subset of the total list of specialty electrical tapes here. If you know of other common useful types please drop a comment – perhaps I’ll buy them, try them out and mention here!

One thought on “Specialty Electrical Tapes”